In 2016 the province of BC declared a public health emergency* leading to wider distribution of naloxone and creation of some two dozen safe consumption sites in the Province; this following over 500 drug overdose deaths in 2015.

In the five years that have followed, overdose deaths have continued to rise with over 1,200 so far in 2020**.

It should be obvious that current measures designed to reduce drug overdose deaths have proven to be ineffective.

Speaking today from Fort St. John the leader of BC Conservatives, Trevor Bolin, stated, “As BC health officials continue to appeal for a safe drug supply, it’s certainly long overdue for the Province to come up with a more comprehensive response to this crisis rather than a band-aid solution of injection sites and the distribution of naloxone.”

“It requires moving away from the stigmatization of drug users many in society currently have.”

Rather than simply offering alternatives to opioids, Conservatives are joining the call from Canada’s police chiefs for a clean and safe supply to be made available to those suffering from addictions; perhaps through pharmacies which already have a high degree of regulation.

“While this may fall under Federal jurisdiction, and Prime Minister Justin Trudeau up to this point is refusing to consider the idea, we are calling on the provincial government to lobby intensely for this kind of change”, Bolin stated.

This alone, however, will not solve the ongoing issue of multiple daily overdose deaths. 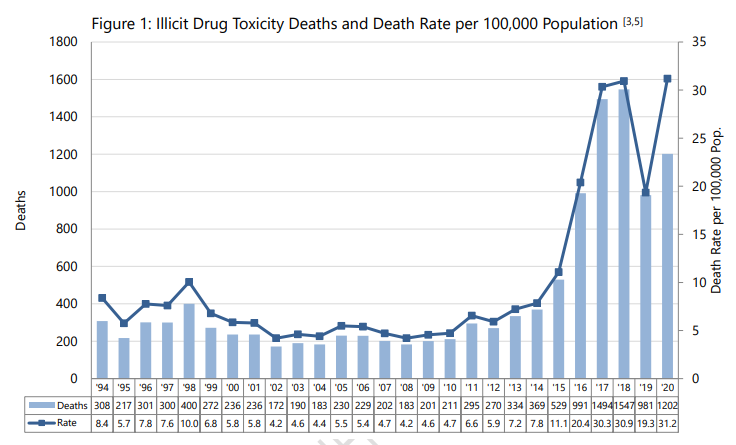 “Far too many lives have been lost due to addiction detox services not being available at the exact time they are needed. When someone’s reached their rock-bottom, and has decided they can no longer live a life based on feeding a debilitating addictive craving, services must be immediately available – not weeks later.”

“If this support is not offered quickly, many will, predictably, change their minds.”

“That is just a first step however”, stated Bolin. “We are again calling on the BC government to ensure not just access to rehabilitation facilities outside of the original communities of those in recovery, but also ensuring that adequate housing is available, along with education services to create an opportunity for employment.”

Bolin continued, “This is not a problem that can be resolved by ad hoc policies, but one which must be handled with a comprehensive all-encompassing program.”

“It must be one designed by community stakeholders and local government – including support groups and individuals – with the backing of the provincial government”, the Conservative leader concluded.

*  On April 14, 2016, Dr. Perry Kendall, Provincial Medical Health Officer declared a public health emergency under the Public Health Act in response to increasing overdoses and overdose deaths in our province. Details are available in the Ministry of Health News Release (https://news.gov.bc.ca/releases/2016HLTH0026-000568).