BC’s Conservatives will listen and watch the actions of this government; we will not allow the province or it’s people to go unrepresented

BC’s Conservatives will listen and watch the actions of this government; we will not allow the province or it’s people to go unrepresented

While we will not have a place sitting in the legislature until after the next election is called, we do have our own mandate, and that’s to ensure this government is held to the line

Yesterday BC’s Lieutenant Governor, Jane Austen, swore in the 24 men and women who, led by Premier John Horgan, will be responsible for the well-being of our province. 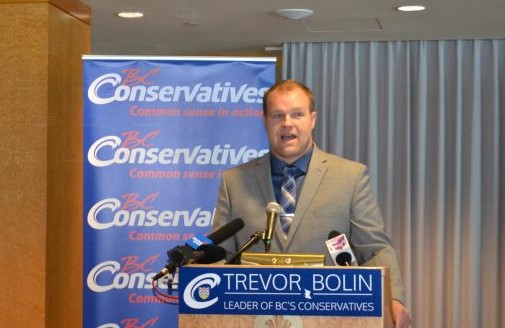 BC’s Conservative congratulate each of them, however we are putting government on notice that we plan to ensure they are listening to the needs and concerns of all British Columbians, not just their supporters.

“Specifically, we will be looking at the important ministries of health, agriculture, resources, oil and gas, and forestry”, stated Conservative leader Trevor Bolin.

We will be looking to Lana Popham, who will stay on as Minister of Agriculture, to be listening to and advocating for one of BC’s oldest and important industries.

As addictions and overdose deaths are still on the rise, B.C. Conservatives will continue to advocate for better services and changes* through Mental Health and Addictions, and we hope that Sheila Malcolmson, working with Health Minister Adrian Dix, can implement changes we have been calling for over the past two years.

When it comes to forestry, new Minister Katrine Conroy, who hails from the Kootenays, should herself be very aware of the thousands who remain unemployed in this industry. Regardless of Premier Horgan’s dismissal of bringing about change to how stumpage rates are set** Conservatives will continue to call for ‘monthly’ stumpage calculations to allow for a more competitive market.

With an overabundance of environmentalists in his caucus, including former Sierra Club Executive Director George Heyman (who continues in his role as Minister of Environment and Climate Change), government must clearly show industry, in particular oil and gas as well as mining, that they are NOT sunset industries, but instead a valuable and necessary part of our economy.

Bruce Ralston, whose ministry likely has the longest title (Minister of Energy and Mines, Low Carbon Innovation, and Minister Responsible for the Consular Core of British Columbia) must safeguard the long-term viability and sustainability of our Oil and Natural Gas sector; this is not the time to leave this power-house industry in the dark, and Ralston must push back against those who are working against it.

Whether through the Citizens Services Ministry which will be headed by former Tourism Minster Lisa Beare ... Municipal Affairs led by newcomer and former Mayor of Tofino Josie Osborne ... or Melanie Mark in Tourism Arts and Culture ... we encourage these Ministers to listen and create a cohesive plan with the communities and local governments in this province.  It’s a scary time for everyone, and all elected officials must work together to make certain we come out of the current COVID pandemic with solid steps in place to ensure our economic recovery.

And finally, to the Premier, the Honorable John Horgan:

Hold the line on taxes and use your majority to show that you can, and will, listen to the people’s concerns and needs.  We ask that the promises*** made by your party in last month’s election be more than just pandering for votes.

BC’s Conservatives will listen and watch the actions of this government.  We will not allow the province or it’s people to go unrepresented.

While we will not have a place sitting in the legislature until after the next election is called, we do have our own mandate, and that’s to ensure this government is held to the line”, Bolin concluded.

** Forestry’s been neglected for decades under two different governments

*** Cancer clinics, new hospitals, seniors acre, and the like shouldn’t be the carrot on the end of the stick during an election campaign